In the holiday spirit we at SubtleAim would like to give you a little gift.

Please note these coupon codes can also be used toward your monthly renewal. Remember, coupons are limited.

#169 The story of "DriverMode" and Andrew Smith

The story of Andrew Smith.

In April of 2014, an individual with the alias of relentless1 contacted me on unknowncheats.
This young british lad asked me outright how to synthesize mouse and keyboard strokes from a driver in a
stable and portable manner so he could go play on servers protected by EAC and the like.

After explaining what needed to be done in order to fully and effectively subvert protections provided by EAC
and remain well hidden, it became evident that this individual was unlikely able to develop said project and
was actually recruiting me to do so.

Having had nothing on my itinerary for the following weeks, I agreed to develop said driver in exchange for a small
payment. Odly enough, Mr. Smith, who knows not a single programming language let alone the low level intricacies to
maintain it, also wanted the source code.

Even though by this point, I knew there was more to the story, I continued development as agreed.

Fast forward a few weeks, I present Mr. Smith with a working prototype and he seems satisfied. He sends payment, I send
code. Our agreement was as follows:

Being that we are on the internet, and trustworthy people are few and far between, I embedded easy to spot
detection vectors within the project, in the event that Mr. Smith decided to run off and breach our agreement.
This way, a simple email of said mechanisms to AC vendors would be on the same level as vehicle or house repossesion.

As you hopefully understand, I purposely developed it as if it was ONLY going to be used by him, and only him.
Re-distribution was NOT intended and is why they will all get banned.

Again as you can see, this project was NEVER meant to leave his hands.

I learn via several sources that Mr. Smith is "asm" and is selling the product under the name "DriverMode" on a
forum called LeagueMode.

Not being surprised, I contacted Andrew and warned him that he puts all of his users at risk and that he should stop
sales according to our agreement. I am a pretty civil guy, I did not get angry, and for the sake of the people he was and
still is scamming, I did not give out the detection vectors.

I gave Andrew several opportunities to straighten himself out and cease sales.

2 weeks ago Andrew came on our SubtleAim dev teamspeak and begged me not say anything, or give out the internals. As
was heard by another individual on teamspeak. Again, taking the civil approach I agreed and told him to halt sales and cease
from scamming more low information buyers.

Yesterday I learned Andrew continues his attempts to sell it, all the while knowing the very high risk of his customers
being detected.

Andrew my young british lad, I gave you a hundred opportunities, but you blew every single one.

Any previous "DriverMode" customer that was scammed by Andrew and can prove as such, gets half off their first month.

We wish all of you Happy and not so full of VACations New Year to everyone!


#903 SubtleAim Signature for Other Sites

To advertise on other sites, you can use this image

Some people have already noticed that Sequential our Lead Developer is no longer active.
He has taken a permanent leave of absence due to IRL/AFK activities. He will no longer be working for SA and on any project related to SA such as the development of  CS:GO Mini.
Even with the loss of our lead developer we can still ensure the top level security that we are known to provide. All our programmers have the skills and experience to continue developing SA and its projects. But one league/AC is an exception, we will no longer support ESEA. At this time we are working on our skill set to handle ESEA. We do not want to risk your account on ESEA. We decided to remove official support for ESEA until we have a better handle on the situation. We would rather drop support then be part  of a ban wave in the future. This does not mean we're detected on ESEA. You can still use the hack on ESEA if you wish to do so, but if ESEA updates/changes, Mini won't be updated for it.
All other Anti Cheats are still supported and will continue to.
Thank you for understanding.
All the best from SA,
Mekelekelek

i haven't done shit in ages 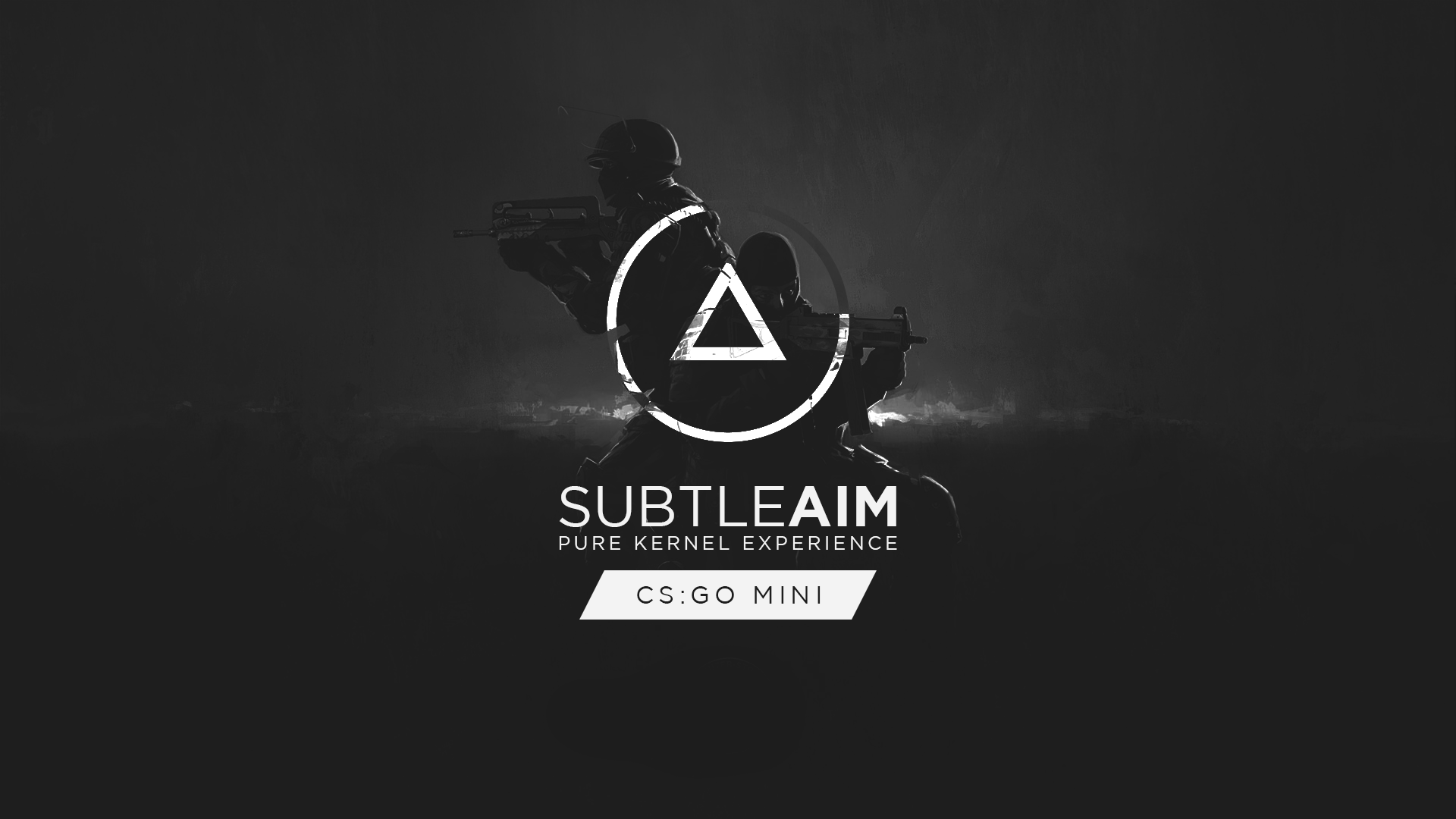 #132 My testimonial by Poseidon1

First off I would just like to say that I have used many different cheats over the last few years, some public and some private. Including some very well know renown names, and I have had lots of good and bad experiences so far.

I was on of the first customers of this product and have been using it a lot even in its beta phase.

This cheat has an extremely strong triggerbot, without a doubt one of the better ones I have used so far. With features such as delay, afterbust and busrt speed, which I ahve not seen before makes this the perfect feature for legit and league play.

The aimbot with the current customization such as FOV, smooth and last but not least RCS is incredible. The recoil control system in this cheat is like none I have used before the the feature of being able to choose how strong it is, is truly awesome!  Even though it is currently lacking individual weapon configs, this is still 100% usable in league matches.

Visuals... There are no visuals. As many people would see this as a huge downfall. I view it as a positive. It doesn't allow the user to blatantly trace of wallbang for their own good. This helps the average user to not get overwatch banned if they aren't very experienced with hacks.

So far the support has been super fast. I received my build in less that 30 minutes after purchasing the product. At first I had a small issue that stopped my authentication system from functioning, however only minutes later I received the support I needed and the issue was quickly resolved.

The staff and mods are friendly, easy to talk to and very fast replying. For me this is a big part of a good hack.

Update: since I made this testimonial I have had a few minor bugs that needed attention, ALL of which were answered politely and swiftly by either members of this community of the coder himself. Excellent service so far.

Last but certainly not least, is security. This has is currently one of only 2 cheats (the only one available to the public at the moment) that I know that is currently able to support more difficult anti-cheats such as EAC and ESEA. I can confirm this as I have tested it myself, and it works flawlessly.

I hope this testimonial will help those thinking of purchasing this cheat to make up their mind. I assure you, that you will not be disappointed.

Since we dropped our landing page, this thread will serve to explain what Mini is, some details, and what you can expect from our product.

Mini is essentially a virtual mouse driver. All of the logic required by Mini is completely contained within the driver.  Mini contains 3 flagship features to enhance your league play:

Mini has no visuals. This is for both security and portability reasons. Users bind keys via a configuration file which Mini responds too. The triggerbot has a configurable delay time and afterburst time. The aimbot has a configurable FOV as well as smooth (aim speed). The recoil control system can be configured to turn on and or off after so many shots have been fired.

Future features for mini include:

If you have any questions about Mini, feel free to register on the forum, email us, or open a support ticket, and one of our staff will get back to you with a response.

contrary to popular belief this is a community oriented project. The customers want exclusivity and even though this product was designed for mass sales (security wise), I've come to realize that we don't want to deal with 300-400 users mainly because we haven't developed the deployment tools necessary for such a load.

Plus, it helps keep the fecal matter that is the CSGO scene from infesting our shores to a minimum.

someone who has a questionable background will definitely be looked into before they are admitted access to this forum.

We literally have zero-tolerance and zero time for drama.

Something I just started an hour ago and have been working on, here's a peak at it...

Keep in mind that this is a partial preview and just a proposed design of what the home/portal page could look like.

the AK clips are theDAR's.

So i finally after literally spending ALL day, I found some good settings that fits my needs perfectly.

I took Mekeleks settings and tweaked them a little

In the video i just played around a bit with the rcs and aimbot, they are strooong but still very legit(you need decent aim to use these settings)

Thank you, good to know those two are bypassed. I personally prefer to play so that I barely notice the aimbot let alone anyone else who would even think to look. I won`t post any other forums names, but I`ve used 2 others, one just seemed really insecure, the other one was a bit overkill for a subtle aimbot(kek) So obviously you guys turned me on(pardon the turn of phrase). Will more than likely be purchasing in the near future. How would you rate the stickiness of the aimbot
I will give you settings for another aimbot I`ve used

With these settings, I personally find light bursts to cause no notice by anyone(even me) but holding gets really blatant, and the rcs doesn`t work the greatest.
Not trying to get support on that aimbot, but would the start stop after x amount of bullets fix this problem with aimbots(they dont have this feature, and I think it`s an awesome one) and how does the rcs x/y work? Just adjustments on how the rcs reacts to fire?

We have 2 sets of fov and smooth setting so you can set how sticky you want your aimbot.

RCS X/Y determines how much your RCS pulls the opposite way on the X/Y.

And yea, if you like 1-2 taping without RCS, RCS start fixes that for you.

Hi guys, thought I'd post this up for people that wish to read reviews before purchase, I'm known in HF and other cheating sites,

I have been around for quite many years on other forums etc & I plan on sticking with SubtleAim, I love the cheat and the community.

Aimbot 10 / 10: I enjoy the aimbot, I love it being more an "aim assist" to me rather then a blatant aimbot, however you can tweak to your preference using configs.

Triggerbot 10 / 10: I love the triggerbot, lots of features, afterburst and delay, works great especially with the awp, you just need to have a good delay on it.

Support 10 / 10: The community is amazing in all honesty, everyone is helping everyone and I rarely see that on forums these days, many helpful users, plenty of active and very friendly!

Security 10 / 10: ring0, security was my top concern on cheats, I have seen plenty of customers using on their mains with knifes and lots of valuables!

I recommend this cheat to any one who is currently thinking of purchasing, it is well worth it.

You're not only buying the cheat, you're buying the amazing support from the friendly community.

You won't be disappointed with your choice.